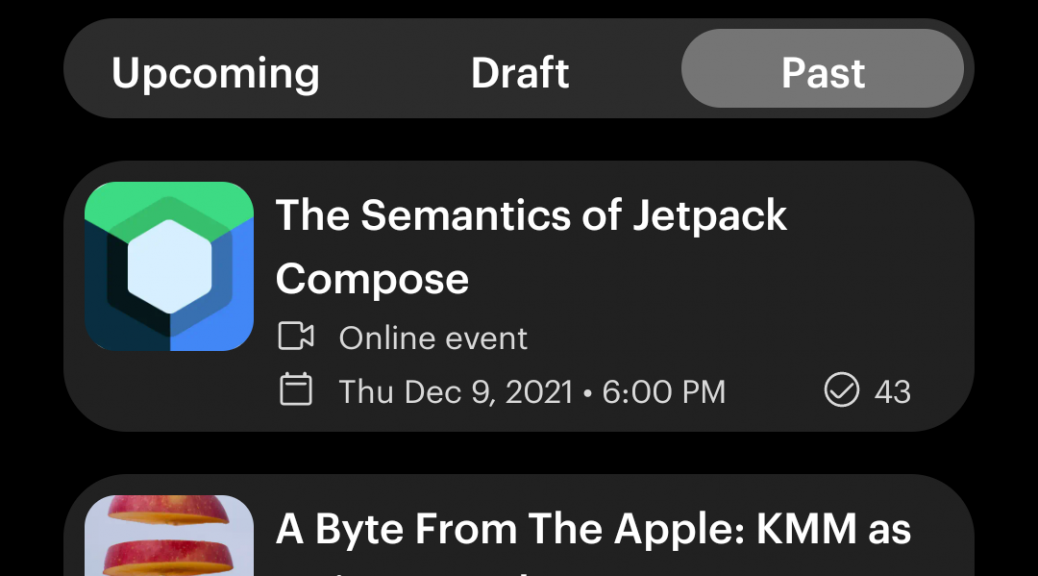 During the first Kotlinconf in 2017, I asked Google for some kind of declarative user interface (UI) framework for Android. Specifically, I approached Stephanie Cuthbertson and Yigit Boyar at that San Francisco conference. I told them I liked the idea of Anko Layouts, the defunct framework developed by the Kotlin team at Jetbrains, but it really needed a solution with first party support and first class execution.

I’m sure many Android developers asked for something similar, just as many had asked Google for first-party Kotlin support in Android before they announced it at Google I/O 2017.

Today, Jetpack Compose not only delivers on my original request. It goes far above and beyond it. It solves the fragmentation problem of many Android OS versions showing UI widgets with different appearances. It fixed the issues of writing complex Adapters with so many kinds of rows for RecyclerViews. It even promotes stateless, functional UI and unidirectional data flow.

We’ve been working full-time in Jetpack Compose for almost six months now on our new Meetup for Organizers app and we love it.

Why I can’t remember()

However, I would like to focus in this blog on one particular, easily misused part of Jetpack Compose… the remember() function.

Here’s a TL;DR (too long; didn’t read) summary of what I’m about to write about the remember() function:

Ever since the beginning of Android development, memory and persistence has easily been one of the hardest challenges. Over the years, so many developers have had their apps break, crash, or forget data by screen rotation or by memory eviction. While Jetpack Compose is amazing, it doesn’t really eliminate these challenges.

One of the first tools Android developers learn when they start to explore Compose is the remember() function. And it’s likely one of the first they should forget. remember() has value when saving state in some notable circumstances, but it’s not great if your state is user input. I’ve seen very senior developers make basic errors when it comes to using remember().

remember() exists to save state in Composable functions between recompositions. However, it has many issues.

First of all, remember() doesn’t handle some configuration changes like rotation. If you rotate the screen, all remembered data on the screen is lost. There’s an easy fix for this called out immediately in the Compose docs. You can instead use rememberSaveable().

Now, you’re probably thinking this whole blog is advocating that you should simply use rememberSaveable() and all problems are resolved, but that’s not my conclusion at all. Once you start using that new function, your solution can now cause three new problems.

If your state is complex, like a data class, sealed class, or class, then you now have to write a Saver for that class to explain how to bundle it. The quickest option is the @Parcelize annotation, but that might not be available in some circumstances.

Then there’s the TransactionTooLarge exception to contend with. Anyone who’s been writing Android apps for a long time knows that if you put too much into a Bundle, then save it to instance state to restore, you will run into this common crash. Anything you save with rememberSaveable() should be small and the entire Bundle should be small in aggregate.

Third, if your Composable function goes off of the screen, even for a moment, everything you remembered with rememberSaveable is lost. This is easy to encounter, for example, if you use Jetpack Compose Navigation and load a new route for a sub-screen. Let’s say your settings page needs a child page. When you return, your composable forgets everything you thought you remembered.

A pretty state of affairs

The solution to the last two problems is persistence. Ideally, you should be saving to your ViewModel or to a database, such as Room or SqlDelight (for Kotlin multi-platform projects). The only values which belong in rememberSaveable() when the state is very complicated are keys to query your database to retrieve the persisted data.

When you think about using the remember() function, just remember…

Do you care if data is lost on rotation? You shouldn’t use remember().

Is the data too large to store in an instance state? If so, you should be persisting data instead of simply using rememberSaveable().

Never forget. While Jetpack Compose is amazing and it makes our jobs as developers so much better, it doesn’t absolve us of concerns about persisting state.